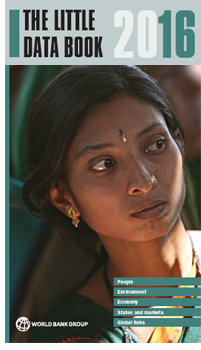 The Little Data Book 2016 is the pocket edition of World Development Indicators 2016. It is intended as a quick reference for users of the World Development Indicators database, book, and mobile app. The Little Data Book 2016 contains 55 key development indicators such as population and population growth, GNI, GDP, GDP growth, exports and imports, and gross capital formation, deforestation, water use, energy use and electricity use per capita; and more.

Notice: The cutoff date for data is February 24, 2016. For most economies PPP figures are extrapolated from the 2011 International Comparison Program (ICP) benchmark estimates or imputed using a statistical model based on the 2011 ICP. For 47 high- and upper middle-income economies conversion factors are provided by Eurostat and the Organisation for Economic Co-operation and Development (OECD).

Help us improve this site
© 2023 The World Bank Group, All Rights Reserved.
REPORT FRAUD OR CORRUPTION